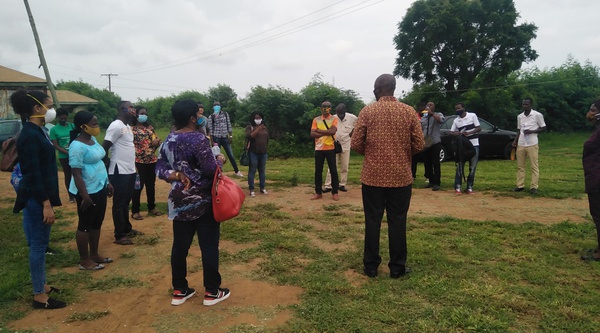 To offer a variety of hands-on experiences, the Department of Agriculture, Ashaiman embarked on a field trip to the The Nungua Livestock Farms located off the Tema Motorway near Mmai Dzor in the Ministry of Food and Agriculture Livestock Farm. The trip was solely organized for the staff and some selected farmers in the Ashaiman Municipality.

The objective of the trip was to get to know about the Nungua farms in more details in terms of the various departments such as rabbitry, grasscutter, piggery and poultry and how they are being managed.

The team set off from Ashaiman Municipal Assembly (ASHMA) at 8:20Am using three minibus with registration numbers. This report covers the activities carried out during the field trip.

The team arrived at 8:42 Am. The manager for the farms Mrs. Amen Bruce Gartey welcomed everyone. She was very delighted about the team’s decision to select Nungua farms for a tour, she introduced few of her staff to us. The team leader, Dr. John Nunya (Municipal Director of Agriculture) also made his introduction. He said the team could have been more than twenty- three but due to the COVID-19 it became very imperative to select the aforementioned number.

To ascertain vividly how activities in the farms are being carried out, the team was divided into three groups, group A, B. and C with each group having a leader. The group leaders were selected from the staff. They were Araba Dernice, rabbitory, Samuel Korasey, grasscutter and Bright Nonye, piggery.

Mr. Bright Nonye took the group A, B and C in a rotation bases to the piggery. At the piggery, he gave a brief lecture on the factors to consider before constructing a piggery, type of pigs that are reared, their management, and the economic importance of pigs.

He said, before establishing a piggery, there are several important elements/factors to consider.

On the management of pigs, he said undeniably that good management and feeding of the pigs will minimize problems related to breeding. He continue to say that Sows should be looked after with much care so that the piglets are delivered normally and nursed properly. More so, farrowing Sow and Litter, it is important to clean and disinfect the farrowing pen with a solution of 2 % of phenyl lotion and keep it vacant for a week.

Mr. Nonye also said that, pigs are valuable for their flesh, prepared as ham, bacon, and pork, and for their fat (lard); they also provide many other products, e.g., leather for gloves, footballs, etc. so the demand is not satisfied due to a number of constraints including poor technical inputs in the production system.

On the feeding, he goes on to say that, good pig feed must contains sufficient energy, protein, minerals and vitamins so rice bran, broken rice, maize, soya-beans, cassava, vegetables and distillers' residues are often used to feed the pigs.

He finally touched on diseases that attack the pigs, he said they are undoubtedly susceptible to a greater number of diseases than any other domestic animal. Respiratory and parasitic ailments are major problems, particularly with limited exercise and lack of sunlight. He said some of these diseases can be transmissible to humans. Among them are brucellosis, trichinosis, and cysticercosis.

The grasscutter section was led by Mr. Samuel Korasey. He saidgrasscutter, Thryonomys swinderianus, is one of the large rodents of Africa's grasslands being domesticated. He made us aware that, naturally, the distribution of the grasscutter is influenced by occurrence of dense and thick cane-like grasses growing in damp places. He said the main purpose of rearing the grasscutter is to domesticate and sell them to other farmers.

He also talked about the various species of grasscutter, he said, the family Thryonomydae has only one known genus, Thryonomys, which is subdivided into two species: Thryonomys swinderianus (Temmick), commonly called the grasscutter or the greater cane rat, and Thronomys gregorianus.

He also said, the grasscutter delivers precocious young after 148-158days of gestation. Hesaid they are placid and relatively prolific animal and they become sexually active and mature at 5-6 months. At this age they can reproduce and give birth to as high as 12 young. They can be easily reared or managed, and this made their domestication as an alternative to poaching them in the wild.

Mr. Korasey said, respiratory disorders, traumatic injuries and gastrointestinal diseases are the most common diseases that normally attack them.

He led the team to the various grasscutter cages to enable them have a good view. He patiently answered every asked by the team during this section.

The rabbitry section was led by Mrs. Araba Dernice, she took the team round the rabbitry. She therefore explained how to know when a doe is ready for mating, she said when it becomes restless and the vulva becomes bloody red then it is ready crossing or mating and will accept buck.

She also goes on to talk about the gestation period which is about thirty-one (31) from conception to birth. She said prior to the delivery, it is advised that delivery boxes are put the rabbit cage five days before delivery.

She added that rabbits can be of great social and economic value to both the family and the community at large. They provide meat, and other products, and can be quickly sold for cash or turned into a nutritious meal when needed. From there, she gave the platform for questions and answers.

The team left the farm at exactly 12:10 pm GMT with all objectives achieved.

Sign up and you will be the first to know the latest news, insider-only info, and more.